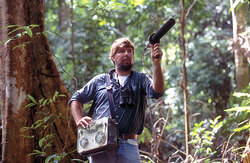 ﻿The Theodore "Ted" A. Parker III Memorial Scholarship, sponsored by Victor Emanuel Nature Tours (VENT), provides financial assistance for OYBC student members ages 14–18 to attend Camp Chiricahua, VENT’s flagship summertime youth birding camp. Camp attendees do not need to be expert birders but should have an interest in natural history study and observation. VENT youth camps present a rare opportunity for young naturalists to be in the field with their peers and with expert leaders. One scholarship will be awarded each year. Funds for the scholarship are provided by an anonymous donor.
The 2020-2021 scholarship application period has ended.
​Applications must be submitted to Black Swamp Bird Observatory by January 15, 2022. The scholarship will be awarded in February.

Scholarship Guidelines:
VENT Scholarship Application Packet
​To understand the development of youth birding, you have to go back to 1986. In that year Victor Emanuel, through his company Victor Emanuel Nature Tours, inaugurated the country’s first-ever youth birding program with Camp Chiricahua, a two-week summer camp in southeastern Arizona. Nothing like this camp had ever been attempted, and the idea behind it was to connect young people more deeply to birds and nature and to other birders their age. Essentially, Victor wanted to give to the birding community what he and other widely distributed young naturalists never had when they were growing up.

That debut camp was a marvelous success, and because it was the first of its kind, National Audubon produced a feature article for a spring 1987 issue of Audubon magazine which chronicled the adventures of the camp. Through word of mouth, and publicity from the Audubon piece, the camp program quickly gained momentum such that within a couple of years it had become a staple of the North American birding landscape. The success of those early camps was vital, for it demonstrated that demand existed for birding and natural history-based programs tailored to young people. Through the years VENT’s commitment to youth birding has endured. Camp Chiricahua remains the flagship camp, but other camps have operated in California, Washington, and Texas. In 2018, VENT’s youth birding camps program celebrates the thirty-second year since its founding, and the tradition grows richer.

Through the years VENT youth birding camps have been staffed by outstanding leaders who have been eager to share their enthusiasm and knowledge, among whom are some of the most respected people in modern birding including Victor Emanuel, Pete Dunne, Kenn Kaufman, Michael O’Brien, and Roger Tory Peterson, as well as many other natural history exemplars. Since the program’s inception, over 400 young birders have attended these camps. Many former campers have pursued careers in science, conservation, teaching, and professional tour leading. VENT youth camps have touched the lives of many young people; for some, attending a VENT youth birding camp has been a life-changing experience.

VENT is especially proud to celebrate its relationship with Black Swamp Bird Observatory in support of youth birding. In 2015 VENT and BSBO announced a partnership in the name of promoting birding and conservation in Ohio’s youth whereby VENT will fund a full scholarship every year for a member of Ohio Young Birders Club to attend Camp Chiricahua. The Theodore A. Parker III Memorial Scholarship is named in honor of a man who will always be remembered as one of the greatest field ornithologists who ever lived. In addition to his legendary field skills, “Ted” led professional birding tours for VENT in the 1980s before joining Conservation International as an ornithologist and ardent conservationist prior to his untimely death in 1993.

Ted grew up in Lancaster, Pennsylvania where he was known as an exceptional young birder.

Theodore A. Parker III, or “Ted” to those who knew him, is remembered as one of the greatest field ornithologists who ever lived. In particular, Ted was a master of bird vocalizations, and his ability to recognize a vast number of species by sound alone was legendary among his colleagues. Blessed with an extraordinary memory, Ted could instantly identify more than 4,000 bird species by their vocalizations, essentially every bird in the Western Hemisphere.

Ted Parker grew up in Lancaster, Pennsylvania where from an early age he knew he wanted to be a naturalist. As a youth birder, he won the respect of experts in the region with his remarkable ability to find and identify birds. In 1971, during his last semester of high school and first year of college, Ted set a new North American “Big Year” record with 626 species. However, the diversity of birdlife in the United States wasn’t enough for him. He was soon exploring Mexico, and in 1974 he began accompanying field expeditions to South America with teams from Louisiana State University, rapidly achieving an unparalleled level of expertise on tropical birds.

Ted was a one-of-a-kind talent. Displaying the right combination of drive, focus, and attention to detail, Ted revolutionized Neotropical field ornithology. He never went anywhere without his sound recorder, and the massive amount of time he spent working in the forests, wetlands, deserts, and savannas of 22 tropical countries resulted in an incredible 10,000 sound recordings representing some 2,000 species of birds, mammals, reptiles and amphibians. Ted also was a meticulous note-taker, and the field notes that accompanied his recordings would set the standard by which Neotropical field ornithology was conducted. All of Ted’s notes and recordings are housed at the Cornell Lab of Ornithology’s Macaulay Library.

Owing to the time he spent in the Tropics, Ted’s ever-increasing knowledge of ornithology was accompanied by a burning passion for conservation. As a member of the Lab’s administrative board, it was Ted who pushed the organization to place a stronger emphasis on conservation. In later years, Ted worked for Conservation International as a senior scientist where he led the group’s Rapid Assessment Program (RAP), which deployed teams of scientists to remote areas of the Tropics that had never been biologically surveyed, and that often faced destruction. Ted was working in this capacity when his life ended tragically on August 3, 1993 in a plane crash amid a remote cloud forest in the Ecuadorian Andes.

​In addition to his research expeditions, Ted was a longtime friend of Victor Emanuel and a professional tour leader for Victor Emanuel Nature Tours.