Dates and Deadlines
Open Scholarship, apply at any time
Notification of Award(s): Rolling

A Scholarship Fund check for up to $250 will be sent to offset your tuition. 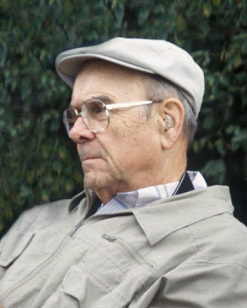 John Gallagher, the feisty environmentalist who lead the fight in the late 1960's to stop U.S. 68 from being extended next to Cedar Bog, died Tuesday, August 7, 2007, in Community Hospital. He was 83.

By profession an insurance agent, Gallagher was passionately Irish and passionate about nature, founding the Clark County Audubon Society in 1964 while taking a bird-watching class from then Wittenberg University Professor Louis Laux.

"About three-quarters of the way through the course, it was John who got up and said, 'We can't end here,' " Laux said for a 1998 story. "Once John got this on his mind, we had an Audubon Society."

Fearing noise and pollution would ruin Cedar Bog's ecosystem, Gallagher brought the same determination to fight a plan to run U.S. 68 beside the nature preserve. The grass-roots battle "lasted nine years, and I spent almost full time on it," Gallagher said in an interview with the News-Sun. "I just couldn't give up.

"Maybe it's the Irish in me," added Gallagher, a long time officer of the local Irish Fellowship.

Although he had no children of his own (wife Pauline died in 1986), he was tremendously proud of the young people he brought into the environmental movement, calling them his boys. Among them are Neil Bern-stein,winner of the Distinguished Science Teaching Award from the Iowa Academy of Sciences; Kevin McGowan, an ecological researcher at Cornell University's Laboratory of Ornithology; David Westneat, a behavioral ecology and zoology teacher at the University of Kentucky; Bret Whitney, a renowned nature tour guide who has identified several species of birds; and John Horner, once named Educator of the Year by the Environmental Education Association of Washington state.

Gallagher's gift of gab was honored in 1989 when the Ohio Department of Natural Resources named a state nature preserve in Clark County for him. He was moved to tears by the surprise, and the headline reporting the dedication read: "For once, he was speechless."